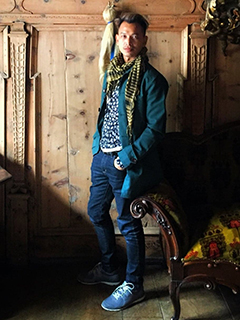 
Anurak, born as the youngest of 9 brothers and sisters in Bangkok, Thailand in November 1972, was interested in the arts since a very young age. Painting, drawing, sculpturing, but also music and movie.

Anurak studied in the College of Fine Arts and Interior Design in Bangkok University. After university, he worked in Media Plus; a famous radio broadcasting company as a Co-Producer for 103 Smash Radio and 107 Soft FM. which served US & UK hits to listeners in Bangkok. Anurak created and produced many promotional spots for the stations. As a music lover, Anurak became deputy editor for POP magazine; a very popular entertainment magazine for teenagers. The magazine featured latest news and updates from the international music scene and from Hollywood. The readers recognized his style of writing as a sharp music critic.

Anurak then worked as “Executive editor” for anywhere magazine - Thailand’s leading travel magazine - and his sense of arts was responsible for the stylish looks of the magazine. He realized how lucky he was during his 15 years at “anywhere”, enabling him to see the world and its cultures and people. That’s why he got involved in SKILLS FOR LIFE to help give a similarly good future to some of the young adults living there and trying to live their own dreams.