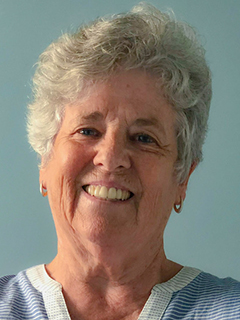 
Anthropologist, teacher, photographer, writer, art gallery owner/director, Joanna taught in her native country New Zealand, the Solomon Islands and England before beginning her international Red Cross career that spanned 28 years.  From 2002-2005, she was Head of the International Federation of Red Cross and Red Crescent Societies’ Delegation in Myanmar, and she also worked in Africa and the Caribbean/Central America. In the Geneva HQ, she held a number of Department Head posts and was a leading figure in the Movement’s global events and campaigns over a period of 15 years from 1988-2002.

In 2004 she co-founded La Luna Gallery in Chiang Mai, Thailand specialising in S.E. Asian contemporary art focussing on art from Malaysia, Myanmar, Thailand and Vietnam and from 2011-17 she was joint owner/director of Colour Factory, operating four shops in and around Chiang Mai.  One of their main products were the painted elephants of the internationally known ‘Elephant Parade’. Her company was supportive of Elephant Conservation and organised of a number of events to bring attention to this issue.

This interest in painted elephants spread to real elephants and Joanna was a founding member of the Asian Captive Elephant Working Group (ACEWG) which brings together researchers, vets, academics and experienced elephant camp owners who work to provide guidelines and advice to those working across Asia with captive elephants.

She is also a board member of a newly created foundation, ‘Cultural Crossroads’ which is working towards establishing a dynamic centre of Indigenous Culture in Chiang Mai to honour, share and sustain endangered traditions of the Golden Triangle.

Joanna is the author of two books about Myanmar, namely ‘Two Eggs and a Lemon, my four years in Myanmar’ and a photo book, ‘Portraits of Myanmar, a Celebration of Work, Play and Prayer’. Joanna has been living in Chiang Mai, Thailand since 2006.